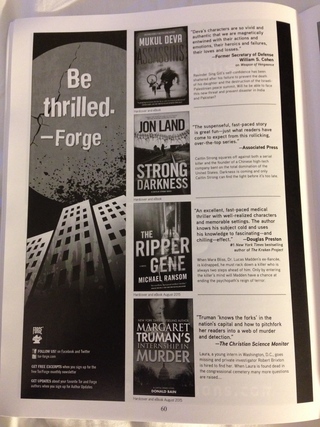 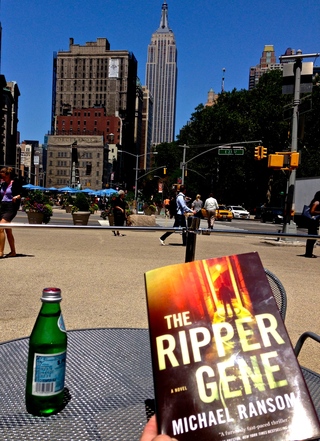 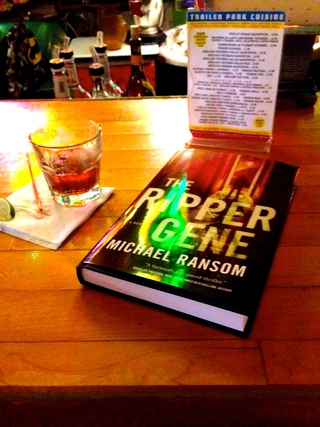 Excerpt from The Apocalypse Gene

Halfway around the world a dark shape crept across an empty parking lot in the night, stealthily picking a shadowy path to a rear entrance at one of the loading docks to the EMBL laboratories.  A light breeze rattled a few mirthless leaves across the pavement.  Suddenly a flash of heat lightning illuminated the entire landscape, leaving the prowler completely and utterly exposed.  But just as quickly it was dark again, and the intruder ran across the rest of the parking lot in a zigzag fashion, crouched even lower to the ground.  At the rear of the building the shadow lithely swept up the steps and onto the platform, briefly pausing to survey the stacks of boxes and crates piled haphazardly on the loading dock.  Labels reading CAUTION: BIOHAZARD, RECOMBINANT MATERIALS, RADIOACTIVE or the familiar skull and crossbones of POISON were pasted on several of the containers.

Navigating between them, the figure knelt down beside the large steel doors and inserted a card into the key slot.  A series of intermittent clicks and beeps echoed in the still nighttime air.   Seconds later the tiny light above the keyhole changed from red to green, the door released, and the intruder slipped noiselessly inside.

In the laboratory the shorter of the two scientists called his companion to his bench and held a piece of film up to the lights overhead.  He pointed to the increasingly dark spots on the film.  "You know, Ethan was right.  This gene is up-regulated just before the cell destroys itself, right here at post-treatment 2 hours."

"Ethan, Ethan, Ethan."  The tall and gangly frizzy-haired scientist named Derk shook his head comically, as he repeated the name of his American friend in his thick Dutch accent.  "He has too many ideas."  He sat back down on a stool next to Anton and put his gloved hands on his extended knees.  "So we get to test them for him."

"Yah.  But we get a Science paper too, maybe?"  Anton reminded his tall friend.  "That would be nice, no?"

"Ah yes," Derk sighed.  "Science."  A smile spread across his normally lackadaisical features as he envisioned his name on a paper in Science.  Derk's long, almost comical face and dark brown eyes suddenly livened up.  Ethan had included them as authors in the present study since they'd been helping him with some experiments.  If the paper that Ethan and his advisor in America were preparing to submit to Science were published, it would be their first big publication.  "You are right Anton.  That would be nice."

Anton nodded in agreement, his straight brown hair moving with his head.  A native Austrian, the short but handsome young man looked about fourteen years old, even though he was actually twenty-five, almost twenty-six.  He raised his eyebrows above the rims of his tortoise-shell glasses.  "You know, I sent those images of apocalypse translocating to the nucleus over to Ethan yesterday." He paused then added, "Encrypted, of course.  He's such a worrywart, ever since he got scooped last year.  But this gene of his—the more we study it, the more I think that he may be right.  It really may hold an important key to cancer."

"So you like the biblical name he's given it, the apocalypse gene?"  Derk said "apocalypse" in a deep and austere voice that made Anton laugh.

"Oh sure—the complete and utter destruction of a cancer cell is a rather apocalyptic event."  Anton nodded again in agreement.  "At least from the cancer cell's point of view, of course."

"Yah.  Now we just have to find out which part of the protein is the actual cell killer."  Derk paused, thoughtfully.  "I guess we could do a set of mutations until we knocked out the killing activity."

"Perhaps."  Anton sat back down at his bench, staring at the film before him.  The room became silent for several moments, the way it normally does when two scientists come to a pausing point and each is mulling over the data, trying to formulate the next hypothesis.  Derk broke the silence.

"Hey Anton.  Do you remember how badly Ethan wanted to learn Dutch and German?"

Anton chuckled at the memory. Ethan had been fasincated by language- constantly asking them how do you say this in German? How do you say that in Dutch? He'd wanted to know every expression during the three weeks they'd spent together at Cold Spring Harbor when they'd initially met in a course on Eukarytoic Gene Transcription. Anton recalled how Ethan had laughed after Irene recoiled when he'd asked if she'd watch a movie called "Horror-Nacht von der Fledermaus". He'd found it exquisitely hilarious that the German word for bat- Fledermaus- literally, flying mouse- could inspire such terror in the soft-spirited German girl.

"Well. Ik moet plassen als een struisvogel."  Derk rose from his chair and sauntered in the direction of the door.

"You have to pee like an ostrich?"  Anton peered up from the film with a quixotic look on his face, unsure that he'd heard correctly.

"It's something the people from my hometown say.  I taught Ethan to say it in Dutch, and he taught me to say, 'I've got to pee like a Russian race horse' in English."

"Why a Russian race horse?"

"I don't know," Derk said thoughtfully. "Why an ostrich?"

Anton peered at his friend for a long moment.  When it was clear the he had no intention of providing any further enlightenment, he spoke. "Well, at least both of you should have no trouble expressing your need to pee in each other's country."

"No," Derk acknowledged Anton's observation in a continued thoughtful pose.  "I suppose not."

Anton watched as Derk turned and finally left for the bathroom. He shook his head with a small laugh, then resumed the tedious task of labeling the test tubes on the rack in front of him.

Down the corridor, Derk flipped on a light to illuminate the rest of the hallway.  As usual, he and Anton were keeping late hours at the lab.  They were both night owls, and working at night had many advantages.  No people using up valuable time on much-needed equipment, plenty of bench space to set up multiple experiments.  Within a year they would be finishing up their Ph.D.s and trying to get postdoctoral positions in the United States.

Derk walked down the long dimly lit hallway.  His topsider shoes flapped at his heels—they were at least four years old and were worn down to modern-day moccasins.  They made a loud "flap, flop" sound as he clopped down the hallway.  At the end of the corridor he turned the brass curved handle of the lavatory door and entered the bathroom, brushing haphazardly at his frizzy hair as he passed the mirror.  He walked around a partition and stood in front of the urinal on the other side.

After a few seconds, the door creaked open.

"Aha!" Derk mock-exclaimed. "You had to pee like an ostrich too, no?"  He laughed, but only silence greeted him. "Anton?  Is that—"

The slender figure, dressed entirely in black, came swiftly around the corner.  For a split second, Derk thought it funny that someone needed to pee so badly.  And then, with a single fluid motion, a thin wire was wrapped around the gangly scientist's neck- going taut just below his protruding Adam's apple- then pulled violently, with a sickening jerk.

A few minutes later the assassin dragged a second body down the long corridor, and left it in a heap beside the other corpse in the bathroom stall.

"Jesus."  The killer removed a black ski cap, and long black curls shook down out of it, illuminated in the moonlight streaming through the high windows atop the men's bathroom.

The tall, lithe woman pressed her lips tightly together and tilted her head, staring with deep and unmoving blue eyes momentarily at the two young bodies lying on the floor. Aafter a brief moment she turned and exited the bathroom.

Back down the hall she slipped into the laboratory where they'd been working and tapped a code into her phone. She flicked on a thin flashlight, placed it in her mouth and began rummaging through the various papers on the messy laboratory benches.  She picked up a piece of X-ray film labeled "apocalypse western blot 03-29", folded it neatly, placed it into the black briefcase on the floor... and resumed her search.

When she finished examining the tops of the desks, she squatted down and picked the locks on the drawers, beginning the laborious task of screening their files, notebooks for any other evidence of this so-called "apocalypse gene."