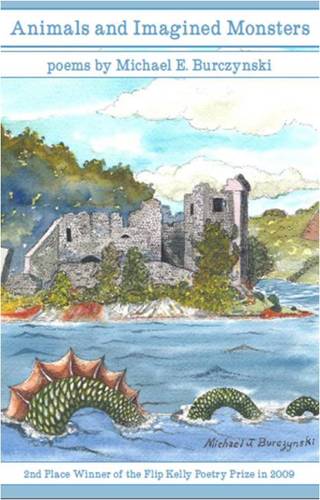 "Animals and Imagined Monsters" represents a selection of poems conceived and written over the course of two decades. As Sandra [McPherson] says, it is my relationship with the wild, and the fearsome, which has often driven my creative energy. In the wild we find truths—about the world and ourselves. Not just the forest-cloaked beasts that live out the daily tragedies of life in the wild, but those dark and fierce places in ourselves as well. Be they real, or imagined.

The poems spring from a background of humble beginnings as a preacher’s child in rural Mississippi, to a twenty-something wandering the wilderness of Idaho, to a thirty-something living in an unfamiliar city and navigating turbulent relationships. These poems don’t touch upon the joy I’ve more recently experienced in raising my beautiful family, who generate a new type of poetry in my life daily… and the poems keep coming.

While recently touring the Fondation Beyeler Museum of Art on the outskirts of Basel, Switzerland, I stumbled across an exhibition of the works of Henri Rousseau. I was dumbfounded that it had been twenty years since I’d lived in London and last seen his most famous painting Surpris! It was a painting I'd never forget, of the fabulously spooked and toothed tiger sneaking through the jungle beneath an electrified night sky. I was humbled by the chance to unexpectedly see it again.

I was further impressed to learn during the exhibition that Rousseau never actually visited the jungle, despite vivid paintings like Surpris!, La Charmeuse de serpents, Le repas du lion, and others. In retrospect though, the same goes for me—I’ve never crouched in the Congo or Serengeti to witness the ferocious cataclysms or near misses described in some of these poems. I have in fact never been to Loch Ness. But, and I believe Rousseau would have agreed—this is one of the beauties of art in all its forms, be it painting, poetry, sculpture, or song—you don’t have to be there. You just have to imagine it… and then share it with others.