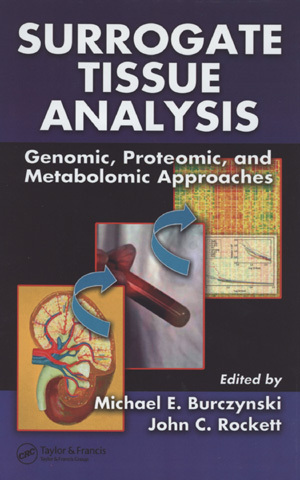 Despite rapidly expanding interest in potential applications of surrogate tissue analysis and intense competition to identify and validate biomarkers in appropriate surrogate tissues, very few peer reviewed publications describing the use of this approach have appeared in the scientific press. One of the first publications on this topic, Surrogate Tissue Analysis: Genomic, Proteomic, and Metabolomic Approaches describes initial applications and considerations for "omic" technologies in the field of surrogate tissue analysis.

Highlighting important issues to consider when conducting profiling studies to identify novel biomarkers, the first section covers transcriptional approaches in surrogate tissues. It provides a review of important issues in peripheral blood profiling, summarizes results achieved when evaluations of various blood preparation platforms are used for the purpose of transcriptional profiling, and covers the relatively novel application of transcriptional profiling in neurological and oncological disease settings. The second section focuses on proteomic and protein-based methods for identifying markers in surrogate tissues, highlighting immunoassay and mass-spectrometry approaches for assessment of proteins in serum and other fluids, with a focus on the implications of protein-based biomarkers for detecting and monitoring early stages of cancer. The third section explores metabolomic approaches along with other novel molecular screens that can be applied in surrogate tissues to find biomarkers, and examines in detail the rapid development of metabolomics into a powerful technique for biomarker identification.

The authors conclude with coverage of regulatory considerations, economic impact, and pan-omic strategies which will undoubtedly impact surrogate tissue analysis in the future. They explore current concepts in pan-omic approaches during drug development where a compendium of data generated by multiple profiling approaches are assessed and evaluated with its impact on the field of systems biology. The last chapter rounds out the coverage with a brief look ahead towards future analytical issues that will likely arise in the field of surrogate tissue analysis. The book is both an introduction to the various "omic" technologies in this young field and a fundamental reference for scientists interested in identifying biomarkers in surrogate tissues.