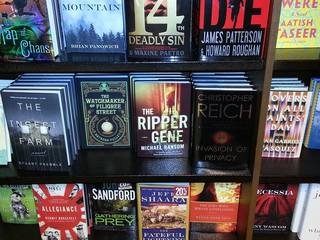 I hope this will find each of you well. I've decided to start a Newsletter, now that my second novel is well underway. I hope you'll enjoy hearing about a variety of happenings going on at my end as I try to wrap up my followup novel.

It's hard to believe it's been almost a year since THE RIPPER GENE came out. It did very well for a debut novel and I know that I have many of you to thank for that... so Thank You! It reached No.2 on Amazon's Hot New Releases in Medical Thrillers, and it broke into the Top 10 on Amazon's Overall Medical Thrillers list. I couldn't believe the company I was keeping...if you'd like to hear more about that, check out my latest blog at www.michaelransombooks.com. THE RIPPER GENE currently holds one of the highest ratings in the Medical Thriller category on Amazon coming in at 4.9/5 stars. It's made several hundred shelves in GoodReads, and posts a very respectable 4/5 stars there as well. None of this was possible without enthusiastic readers, so thank you all once again! And if you haven't already read it-- well, after all, this is the digital era where backlists never go away... so help yourself. I will be continuing to promote The Ripper Gene this Halloween since its an official 2016 Thriller Debut, so I'll let this mailing list know about those giveaways ahead of time.

What I've been doing:

As usual, I attended this year's Thrillerfest, which is the annual gathering of International Thriller Writers held each year in NYC. What a great time! I was in the 2016 Debut Class of Thriller Authors this year, so a group of about twenty of us had the opportunity to share our books with the ITW members at the annual Debut Authors Breakfast, where we signed copies of our books and had casual conversations with many of the best selling authors in the world. The ITW is such a special organization that truly supports beginning authors by giving us access to authors at the very top of their game. This year I got to speak with Walter Mosely, Gillian Flynn, and Lee Child and enjoyed spending time with other authors like RL Stine, Steve Berry, Jon Land, Karin Slaughter and other true thriller geniuses. On a super-positive note, The Ripper Gene sold out at the Barnes and Noble store at Thrillerfest this year which was quite an honor!

I've recently been sitting on mystery author panels in the New Jersey library system and I have to say the panel experiences have been nothing less than outstanding. I've made many new friends with some very talented fellow New Jersey writers, including Jeff Somers, Jon Altman, Shelia Howe, Wallace Strobe, and several others. We've had great interactions with the audiences and I even moderated one of the sessions. Its really fun getting to meet fans of the books and people who become interested in the course of the discussions. These are great for me because they remind me "Don't forget...you're still an author" even as I have to go back to work in my day job as a pharmaceutical researcher.

We had some exciting preliminary discussions with Paper Street Films in NYC and for a while it looked like a movie option was in order... but (so far) it's not to be. Something will come along, I'm sure of it.

And of course... I'm writing! Currently working on a short story for an anthology edited by RL Stine, then going back to work on novel # 2 (and # 3).

So- I won't talk any further in this first edition of my newsletter. I hope its given you a worthwhile update. If you ever have questions for me, or would like me to speak with your book club, let me know via www.michaelransombooks.com. I love getting the chance to be an author whenever the opportunity presents itself!

Happy reading and writing out there, and thanks one last time for all your support!